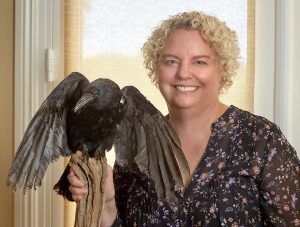 At the core of my work is a deep love and respect for all of animal kind and the sacred spiritual nature that we share with them. There is an essence in every living thing, the anima, that cannot be so easily defined by logic or science. Our anima yearns to connect with all that is sacred in the world, but only in the middle places between thought and no thought do we glimpse this higher reality. My current work inhabits these middle places and reveals the sacred nature of animals and birds through the use of Medieval and Renaissance religious symbolism and decoration. I use classical realism and allegory to remind viewers of the grandeur of the animal kingdom while challenging them to expand their perception of the natural order and to evoke a sense of yearning to connect with nature in real yet mysterious ways. My style is defined by attention to detail, creation of decorative yet inhabitable spaces, and perhaps most notably by depicting animals as noble spirit-filled creatures that have their own lives and secrets. I often incorporate elements of classical architecture and decoration into my compositions that may carry hidden symbolism or meaning.

P.S. For the curious, my first name “Marque” is pronounced “Marquis” like the title for French nobility. Considering my passion for the Renaissance it is an intriguing coincidence…

Artistic Education:
I am a largely self-taught artist and have taken workshops or private instruction with the following fine artists: Koo Schadler, Katherine Stone, Pamela Hawkes, David Gray, and Vicki Walsh. Due to my formal education, I have fundamental knowledge of animal anatomy, physiology, and psychology which is an important foundation for my work as an animal artist.